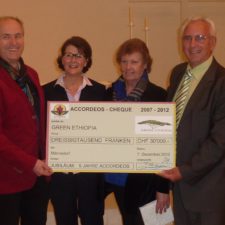 Anniversary donation of the Accordeos Foundation

On December 7th 2013 was the 5 year anniversary celebration of the Accordeos Foundation with an event at the Franziskus Center in Ãœetikon am See. For the occasion of the anniversary, the foundation donated the amount of CHF… Read more

Award for our projects by the Oromo Region

After receiving an award by the Tigray region in March 2009, in January 2010 our projects in the Oromo region were honored. The award honors our activities regarding protection of natural resources, local development and women affairs under… Read more

We are very proud and happy that our Fondation Green Ethiopia was honorad at the 3rd Tigray farmer’s Festival at Mekele.

At the General Assembly of 18.04.2008, Swiss Re has announced that the founding family has been elected for the Civilian Service Prize 2008, donated by Mr. Bremi. The award was in recognition for “outstanding contributions in the field… Read more